Marland Hill Community Primary School is one of eleven local primary schools who make up the Inspirational Professional Learning Network Community. The mission statement of the group states “Our Inspirational Professional Learning Community schools share a commitment to become outstanding establishments with the highest possible standards. We aim to provide challenge, mutual respect and positive support; reflecting, learning and developing together. Through collaboration we will exchange ideas, explore possibilities and improve from within in a spirit of trust, friendship and professionalism.”

A comprehensive annual programme of support and challenge is agreed for each academic year. The Headteachers of the ten schools work in close partnership to distribute the leadership of this support both internally and externally. In addition, through negotiation with the Local Authority from September 2013, the IPLCN schools received funding for the IPLCN Self Improving Schools System. This system is self sustaining and the schools’ ensure accountability and rigorous school improvement by utilising:

School development plans are reviewed and re-aligned as appropriate.

On Wednesday 11th March, some of our children from KS1 took park in a dance festival this week at Heybrook Primary School.  They performed a routine they have been practising  during our dance & gymnastics after school club.  They all did really well and remembered all their moves!

The IPLCN Girls Football Tournament took place at the Soccer Factory on 22nd January 2020. They came so close to winning and achieved 2nd place.  We are so proud of you all. Well done!

On Tuesday 3rd December, our year 3 & 4 team took part in the IPLCN football tournament at the Soccer Factory.  The boys played really well and were very unlucky to lose in the final.  Well done boys! 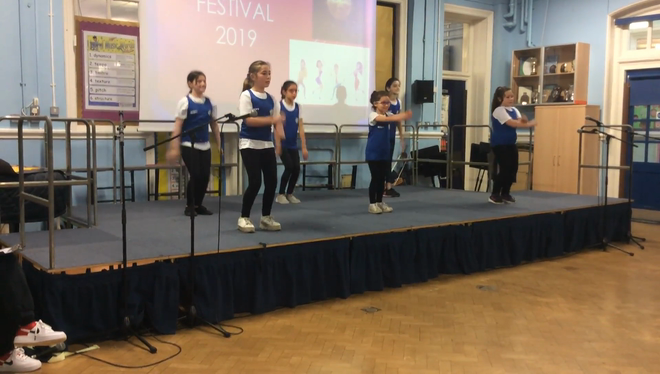 Some of our KS2 children took part in a Dance Festival at Spotland Primary School on Thursday.  The girls were amazing performers.  Well done girls!

Some of our Key Stage 1 children took part in a Soccer Tournament on Friday 18th October at the Soccer Factory.  They didn't win this time, but they all played extremely well.  Well done to them for taking part.

Our Upper Key Stage 2 children took part in a Netball Tournament here at Marland Hill on Wednesday 2nd October, alongside our other IPLCN schools.  Unfortunately they didn't win this time but they played very well and came 4th place overall.  Well done everybody for taking part.

On Tuesday, we held an Instrumental Workshop in the school hall.  Many of our IPLCN schools attended and took part, along with a tutor from Rochdale Music Service.  The children all had a great time, trying out different instruments and playing together.

Some of our Year 6 children attended an Athletics competition with other IPLCN schools, at Greenbank Primary last Friday.  They came 2nd place by losing just 1 point! Well done to them all.  A very close indeed competition indeed.

On Friday 21st June, a group of our pupils took part in the IPLCN cycling competition at Spotland Primary School.  They did very well and came 3rd overall.  Here they are with their certificates.  Well done to all of them!

On Thursday selected year 3 & year 4 children attended an Athletics Tournament at the Soccer Factory.  The children performed really well and came a respectable 3rd place!  Well done to all of you for taking part.

On Thursday 2nd May we held the IPLCN Song Festival here at Marland Hill. 10 local schools came along to perform.  All the children sang beautifully and it was a pleasure to see so many children from different schools taking part!

Our LKS2 netball team took part in the IPLCN Netball Tournament on Wednesday 27th March. The children played really well winning all of the matches they played! Well done to:

You are all superstars!

Well done to Subhan, who came 4th place in the final of the Spelling Bee competition.  We are all very proud of you!

On Tuesday, our Year 6 children held a spelling bee. The finalists were Sienna Rose Hughes, Leah Maplesden, Subhan Mustafa and Malaika Sohail. The overall winner was Subhan Mustafa!  He will represent Marland Hill at the ‘IPLCN Spelling Bee’ at Lowerplace Primary on 3rd April!  Well done to all of our finalists and good luck Subhan!

On Wednesday some of our children attended the IPLCN Dance Festival at Hamer Primary School. The children performed beautifully and enjoyed the experience.

One of our KS2 football teams took part in a football tournament this week at the Soccer Factory. The team came third and played really well. Well done team!

Well done to the children that took part in the Archery Festival. We were delighted that they came second overall. Well done!

Here they are looking very proud of themselves!
Our football champs played superbly in the IPLCN football competition, and brought home the winners trophy!  Well done to them all.  We are very proud.

Marland Hill Student Council Members went to the IPLCN School Council Day at Ashworth Valley. They spent the day making autumn frames which are hanging around the school building. We made a camp fire, drank hot chocolate and even went grass sledging. Very muddy grass sledging. A fantastic day was had by all!.

A number of our LKS2 children represented the school at the IPLCN Dance Festival this week.  They had a fantastic time and behaved brilliantly!  Well done to all who took part!
Top

Unfortunately not the ones with chocolate chips.

Some cookies are necessary in order to make this website function correctly. These are set by default and whilst you can block or delete them by changing your browser settings, some functionality such as being able to log in to the website will not work if you do this. The necessary cookies set on this website are as follows:

Cookies that are not necessary to make the website work, but which enable additional functionality, can also be set. By default these cookies are disabled, but you can choose to enable them below: